Meaning that a judge in E, when seeing a mistake of 0,30, pushes 0,3 or just 3 (to speed up) and that penalty is already inscribed in the system.

What happens currently : a judge is making notes on errors and when a huge one happens, starts thinking : “Ogh, that would have a harsh penalty in total, I should erase the previous ones”. Through “live judging” system it would not be possible to happen.

It’s obvious that the first video is performed much clearer than the second one. The judges are much puzzled of what they should do in this case — count the second one as a penche rotation or count just one rotation as a horizontal pivot?

Our proposal to have a clear difference in the shapes of both pivots : 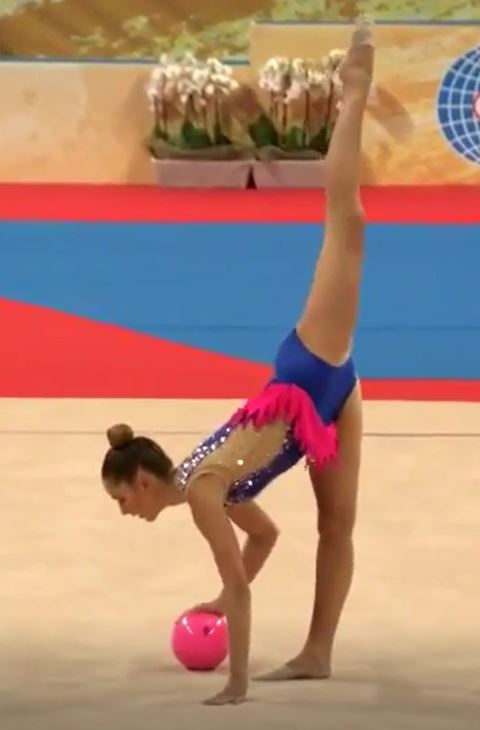 Such example would not be valid : (for penche rotation the trunk has to be lower, for horizontal pivot the gymnast must be on «releve»

For example here a top gymnast is clearly missing a dance step combination, but it does not really matter as during those 8 seconds she can perform 3 AD and earn much more.

To change the definition of R :

The judges are much confused by the catch in last rotation and it often created discepancies in scores. Some judges count such version of catch in 3rd rotation, some judges would say that this is not valid. And it actually does not contribute to the actual difficulty of the routine. So we proposed to eliminate such possibility of catch in rotation when the gymnast has a clear view of the apparatus.

For example in this example the gymnast is performing the rotations UNDER the flight of the apparatus which gives her higher risk of dropping it. While with the current COP and the current draft COP it’s easier for her to perform the «catch in the last rotation» and gain higher points.

The judges are often confused if they should count the outside of visual field in such examples or not.

The R itself does not look like a WOW effect, so the gymnast should be pushed to either increase it by adding horizontal rotations or adding more criteria for the catch.

In this case the last rotation of R would not be valid as the catch is performed on the line of the horizontal level and not below. 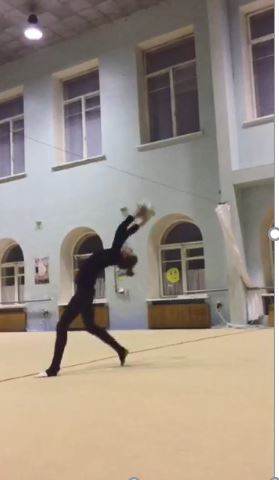 To allow the only possibilities of vertical standing rotations as follows :

So that the judge had an obvious difference.

In this case the judge would give an automatical 0 for the second R without the need to think if the feet position was a bit different or not. Less time to analyze the situation — the higher potential of a correct evaluation.

Horizontal rotations are much more difficult to perform and they give a spectacular “wow” effect of the exercise.

The value remains the same, but the gymnast is ENCOURAGED to make a second horizontal rotation and will be awarded with 0,10 for doing so.

In this case the gymnast is encouraged to make more difficult horizontal rotations (for example, 2 rolls) and will be credited with 0,40.

Currently it’s much easier to throw 1 club and catch it by the other club (would cost the same as the throw of 2 clubs).

The last rotation is obviously disregarded

Currently the exercises are overwhelmed with a work of 1 clubs (throws, catches, small throws/catches, small circle of one club) while the other club is basically motionless.

In order to improve this we propose :

Creating 5 lines that support Artistry of the exercise

Giving points for each of the line

Multiplying the coefficient x the score of each line

Adding the total scores of each line = final Artistry score.