Meaning the minimum R may cost :

Eliminate this criteria (below).  This criteria is quite confusing to count immediately during R and if we use the type of evaluation above it would be easier for the judges to evaluate the R

Either eliminate or change the wording for this criteria (below) . Proposed wording : “Catch DURING a rotation in case the catch is performed outside visual field and without hands”.

Add the possibility of performing leaps with rotation (like jete en tournant or any other leap with rotation of at least 360 degrees) UNDER the flight of apparatus and be evaluated by the BD.

Note : same as above, horizontal axis rotations are way more difficult to execute and should have higher value.

Note : same as above, horizontal axis rotations are way more difficult to execute and should have higher value.

Note : obviously, last rotation is not counted, catch before rotation. In any case, even if caught DURING the last rotation, we do not understand the double value that is currently granted under 2017 COP.

Note : EXAMPLE when the value does not change, but much easier to evaluate when the judge on the paper just writes 0.10 for vertical rotation, 0.20 for horizontal rotation instead of thinking about axis change, catch in rotation etc.

— needs to be considered – very difficult for the judges to evaluate if the ball was caught with 2 hands or 1 hand.
— outside vision control criteria. Not valid? Clear NO from the COP (the ball is not caught in full backscale position), normally YES during competitions. 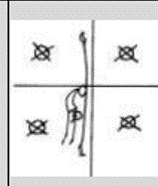 — According to 2017 COP, the last rotation here gives 0,10 as part of R rotations, 0.10 as “catch in rotation”, 0.10 as “change in axis”. Too complicated for the judges to consider in less than 1 second. Plus they need to think about “catch in one hand” and “catch outside visual field” which is not so obvious here.

The public appreciates most of all :

All these proposed changes are targeted ONLY for the sake of improving the understanding of RG within the worldwide audience and are based on the observations during the whole 2017 season.